We chose Dihiya as our symbol as we want to empower women and give them an environment where they can thrive with their sisters.

Dihiya or Al-Kahina (The Prophetess, Arabic: الكاهنة‎), was a Berber queen and a religious and military leader who led indigenous resistance to the Muslim conquest of the Maghreb, the region then known as Numidia. She was born in the early 7th century and died around the end of the 7th century in modern-day Algeria.

The identity of the Dihiya is unknown. Hence her appropriation by various groups. She can be a Berber, an Oriental, mixed Byzantine, a Jew, a Christian or a pagan. Only one aspect seems certain, she was a female. She was adopted as a symbol by women, and was used as a symbol against the foreign occupation, and later as a symbol against male hegemony. Indeed, already during the period of French Colonisation the Kahina was a model for the militant women who fought the French. In the Kabyle insurrection of 1851 and 1857, women such as Lalla Fatma N’Soumer and Lalla Khadija Bent Belkacem, who were known as chief warriors took the Kahina as a model. 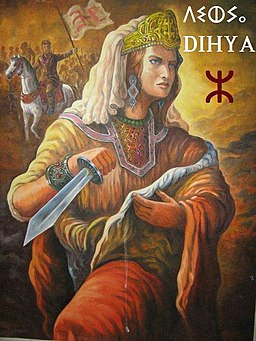 In the present day, the image of the Kahina is constantly used by Berber activists to showcase how they, as people, are strong and will not be conquered or diminished by other communities. While her true appearance is still unknown, artists have depicted her with certain aspects that reinforce the progressive movement she is known to represent.